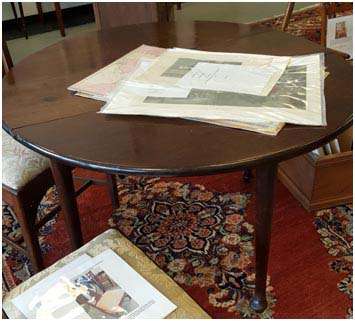 While Queen Anne herself had a relatively short reign, the furniture named for her had a much longer time, lasting from a little before her reign and then well into the rign of George II. Thus, the era of Baroque design can be stretched from about 1700 through to about 1740.

This oval dining table is so well well made that it appears to be made by a well-trained cabinetmaker. Yet is such heavy timbers and such straight legs that the cabinetmaker was likely a further distance than from London yet in a populous city.

In the South in the early 1700s, most furniture was exported from England, given that the small population here could not support but a few cabinet shops. Most books suggest about two-thirds of furniture here was brought from the home country, and that it was not until the later part of the 18th century that about two-thirds was instead made here.

The mahogany timbers are exceptionally thick and heavy, suggesting the wood itself was havested San Domingo. The oak used for the secondary support structures are also heavy and are likely Englsih oak.