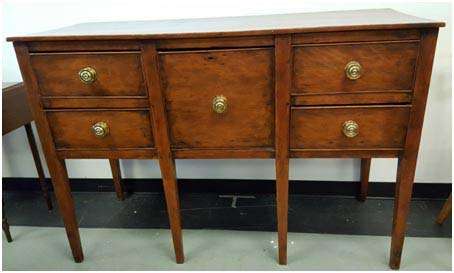 Probably the most iconic form of Southern furniture is the hunt board. These do not show up north of the Mason-Dixon Line. They tend to be taller than sideboards, are often made of Southern Yellow Pine, like this one, and, given the wrought nail construction, likely made by plantation slaves. Southern hunt boards are extremely rare to find and expensive when you do discover one that is even available.

This one has a special story, attributed from its damaged condition. When you pull out the center bottle drawer, you will discover that it is charred from burning all along the proper left side and all along the back. There is no doubt that this one probably saw some Civil War action in the fireplace during a bitter cold time in the winter because some Union soldiers wanted heat. It appears to have been placed near the fire while yet resting on the hearth, becoming scorched. It probably also saw some Confederate lady frantically pulling it out of the fire, all the while screaming at the soldiers for daring to do such a thing to her furniture.

There has been no restoration to the drawer so that it can tell its story as a witness to its history. We would urge that you retain its story as well.