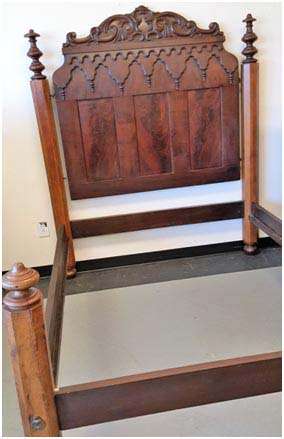 Thomas Day was a free man of color, born 1801 in Dinwiddie County, Virginia. He learned cabinetmaking from his father, John Day. By 1824, Thomas Day had moved to Milton, North Carolina, where he opened his own cabinet shop, working there until his death in 1861. None of his pieces are signed. Only one piece of furniture retained a board from a shipping crate that had his name and address, thus verifying its origin. His signature, then, is his stylistic designs incorporated into his work. All known pieces of Day’s are by attribution. The best text reference is Thomas Day: Master Craftsman and Free Man of Color, by Patricia Marshall and Jo Leimenstoll, published in 2010.

On beds, Day was known for his rectilinear veneered panels, his octagonal bed posts, his newel post-like turnings for finials, his flattened-ball feet, his large and swelled c-scrolls, and his gothic embellishments. For comparison, note the previous image and the following close-up of a bed sold in 2014 at Farmer Auctions in Salem, Virginia and then look at the similarities in the next bed shown from the North Carolina Museum of History.