This chest of drawers is a classic example of American Empire case pieces made about 1825. Note the top drawer is very deep for storing bonnets. Unique to this chest is the penciled description on the underside of the second drawer down. Written in period script is the following, as shown below:

Francis Scott Key was born in 1779, and he died in 1843. His estate and home was the Old Stone House, in Georgetown, Maryland. Here is a surviving image of his house from a period painting:

Francis Scott Key is, of course, best remembered for writing what became our National Anthem, The Star Spangled Banner, during the War of 1812. Upon the death of Francis Scott Key in 1843, the Old Stone House descended to his son, Philip Barton Key. Philip Barton Key was born in 1818. As an adult, he became enamored of the wife of Congressman Daniel Sickles, who later became Major General Sickles in the Civil War. Sickles discovered the affair, and when he noticed Key near his home on February 27, 1859, he went outside in a rage and fatally shot Key. Edwin Stanton, who later was Secretary of War under Lincoln, defended Sickles and won an acquittal as a result of the first time use of a temporary insanity defense. The following wood-cut image showing the murder is from Harper’s Weekly: 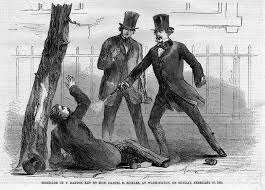 To settle the estate of Philip Key, the contents of the house were sold on December 21, 1859. The buyer of this chest was Dr. Samuel Swope of Taneytown, not far from Georgetown. The road to Taneytown is today called the Francis Scott Key Highway. Dr. Swope is well-known in history for his treating of many wounded soldiers in the aftermath of the Battle of Gettysburg. Also unique to this chest are the carved initials behind one of the acanthus and hairy paw carved feet, “HL.” This is a possible reference to Honore Lannuier’s shop, a noted New York cabinetmaker, who was known for providing other cabinetmakers with similarly carved feet.