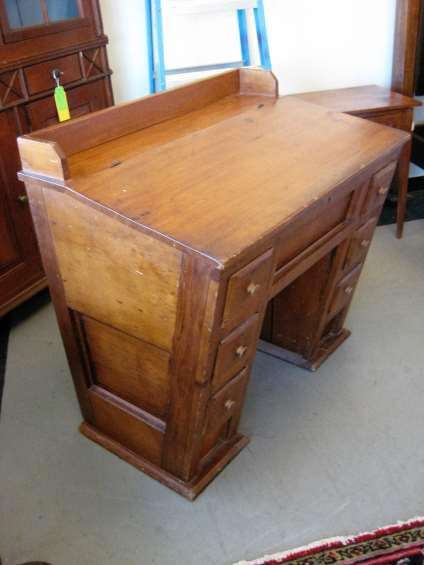 This is a ship captain’s desk, probably coastal New England. As is typical, it is made of New England white pine, with orange varnish over the primary surfaces. From the wear seen, and from the construction noted, it is likely mid to late 19th century. This is indeed a rather unique surviving piece of nautical furniture, a real conversation starter. As with ship captain’s desks seen in museums, this one has inwardly slanted double pedestals to allow the captain to stand at his desk, to access his charts and navigation instruments in the storage area under the center lift-up lid. It also has large footprints for each pedestal plinth to provide stable placement on the floor of the Great Cabin.

The surfaces of the pine timbers are all hand dressed. The joints are butted and then nailed with early, square, iron nails. As would be expected, the drawers have early nail joinery. Several of the timbers are quite wide. The two-board top lid has one board that measures 15 ¼ inches in width, and the top boards of each side are also 15 ¼” wide. The drawer fronts are decorated with chamfered edges, and the interior front rail is also chamfered and ends with a lamb tongue’s carving. The interior has a hidden area under the center shelf.
Here is an image found on the Internet, showing a Great Cabin with a ship captain’s desk in the foreground. 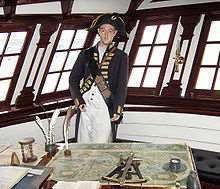 This shows a Great Cabin on the Grand Turk, a replica of a three-mast, English, 18th century frigate. The Great Cabin is located in the deckhouse at the stern (back) of the ship. The Cabin is surrounded by windows.

$2450.00
Offers considered, Terms Available, and Trades Evaluated
Dealer 326
(Note: The original key is in an envelope at the front desk.)