Portrait Print of Thomas Jefferson as Author of Declaration of Independence 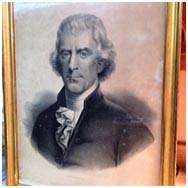 This is a lithograph signed as follows: “Lithy of M. H. Traubel & Co. 46 ½ Walnut St. Philada.” This piece is ex-collection of W. Groke Mickey, until his estate auction in 2009.

Groke was well known locally, having been as a U. S. Ambassador; president of Jefferson National Bank; and benefactor to Monticello. The image area is fine, but there is white residue along the top and bottom edges. Conservation framing is needed.