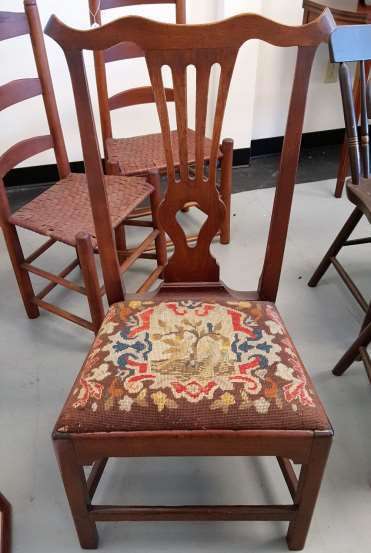 This Chippendale side chair is attributed to Robert Walker (1710-1777) at his cabinet shop in Fredericksburg, Virginia. The primary wood is black walnut, and the secondary wood is yellow pine. The needlepoint seat, which is unlikely original, is nonetheless very old. There is one visible repair of a partial crack to the back of the crest rail near the ear. In terms of art history and decorative arts studies, this chair has gone through several changes in scholarly identification. In the 1937 two-volume work, American Antique Furniture, by Edgar Miller, Jr., this chair is shown in Photograph No. 147 as having been in the collection of Mrs. Miles White, Jr., with the judgment that it is only possibly American because it is “concave in the center” of the crest rail and therefore “somewhat unusual in our country.”

In the mid and later 20th century, because it has through-tenon mortises of the side seat rails, it was thought to have a Philadelphia origin by dealers and auction houses, as, for example, noted erroneously, by Lee Keno on the televised Antiques Road Show some years ago. The through-tenon shows, as follows:

During the 1960s through the 1980s, scholarship in Southern material culture had made a significant change, with museum exhibits and books about Southern furniture coming into the mainstream. In 1982, John T. Kirk wrote American Furniture and the British Tradition. On page 265, this chair is shown in Photograph No. 924 and now it is identified as “possibly Southern.” Most recently, 2006, the Chipstone Foundation published American Furniture, edited by Luke Beckerdite. In this book, two scholars, Robert A. Leath of the Museum of Early Southern Decorative Arts, and Tara Gleason Chicirda of Colonial Williamsburg, in two different chapters parsed their discoveries that Robert Walker and other Fredericksburg cabinetmakers had very identifiable designs. This chair in particular belongs to the school of work done only by Robert Walker during the era of 1745 through 1760. This chair appears to share a history with the Walker chairs in the dining room at Kenmore Plantation, as follows:

In searching other Robert Walker pieces sold, there was a much fancier Walker side chair at Jeffrey Evans Auctions in Mt. Crawford, Virginia and it fetched $28,750 on June 21, 2014! Brunk’s Auctions in Asheville, North Carolina sold a Walker slant-front desk, formerly owned by the Royal Governor, Thomas Lee, where it fetched over $218,000 on May 16, 2015! The purchaser of this chair will not be faint of heart. It is expensive and it should be. In searching the galleries of Virginia, no other Walker chair appears available.