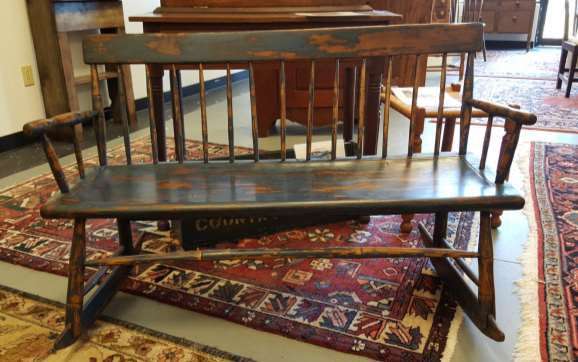 Mammy rockers have long been a well-known furniture form in the South. Iconic in design and use, these uniquely-sized, small, two seaters were used in southern homes throughout the 19th century. Given its deep crest rail and faux-bamboo spindles, this one is most likely from the 1830s and its design is Country Empire. The woods are mostly yellow pine and tulip poplar. The painted surfaces have been restored. The soldier-blue color was determined from dabs of paint left on the surfaces, especially the underside and in various crevices. Butter-milk paint was used faithfully, then worn, and finally waxed. This variant was never meant to have a child-gate, but rather the seat was meant to be entirely open for two sitters.